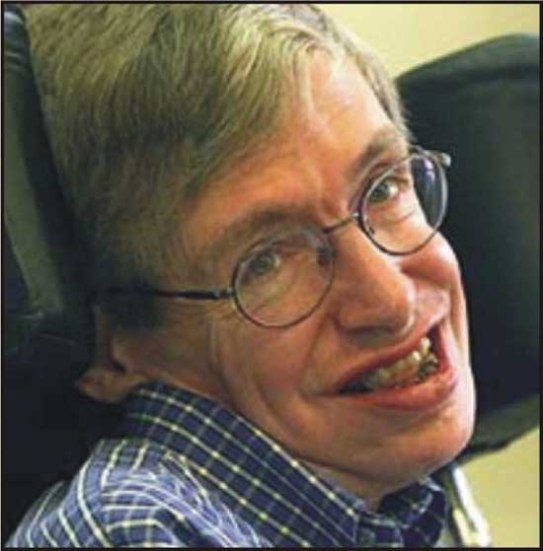 I am often asked: How do you feel about having ALS? The answer is, not a lot. I try to lead as normal a life as possible, and not think about my condition, or regret the things it prevents me from doing, which are not that many.

It was a great shock to me to discover that I had motor neurone disease. I had never been very well co-ordinated physically as a child. I was not good at ball games, and my handwriting was the despair of my teachers. Maybe for this reason, I didnt care much for sport or physical activities. But things seemed to change when I went to Oxford, at the age of 17. I took up coxing and rowing. I was not Boat Race standard, but I got by at the level of inter-College competition.

In my third year at Oxford, however, I noticed that I seemed to be getting more clumsy, and I fell over once or twice for no apparent reason. But it was not until I was at Cambridge, in the following year, that my father noticed, and took me to the family doctor. He referred me to a specialist, and shortly after my 21st birthday, I went into hospital for tests. I was in for two weeks, during which I had a wide variety of tests. They took a muscle sample from my arm, stuck electrodes into me, and injected some radio opaque fluid into my spine, and watched it going up and down with x-rays, as they tilted the bed. After all that, they didnt tell me what I had, except that it was not multiple sclerosis, and that I was an a-typical case. I gathered, however, that they expected it to continue to get worse, and that there was nothing they could do, except give me vitamins. I could see that they didn’t expect them to have much effect. I didn’t feel like asking for more details, because they were obviously bad.

The realisation that I had an incurable disease, that was likely to kill me in a few years, was a bit of a shock. How could something like that happen to me? Why should I be cut off like this? However, while I had been in hospital, I had seen a boy I vaguely knew die of leukaemia, in the bed opposite me. It had not been a pretty sight. Clearly there were people who were worse off than me. At least my condition didn’t make me feel sick. Whenever I feel inclined to be sorry for myself I remember that boy.

Not knowing what was going to happen to me, or how rapidly the disease would progress, I was at a loose end. The doctors told me to go back to Cambridge and carry on with the research I had just started in general relativity and cosmology. But I was not making much progress, because I didn’t have much mathematical background. And, anyway, I might not live long enough to finish my PhD. I felt somewhat of a tragic character. I took to listening to Wagner, but reports in magazine articles that I drank heavily are an exaggeration. The trouble is once one article said it, other articles copied it, because it made a good story. People believe that anything that has appeared in print so many times must be true.

My dreams at that time were rather disturbed. Before my condition had been diagnosed, I had been very bored with life. There had not seemed to be anything worth doing. But shortly after I came out of hospital, I dreamt that I was going to be executed. I suddenly realised that there were a lot of worthwhile things I could do if I were reprieved. Another dream, that I had several times, was that I would sacrifice my life to save others. After all, if I were going to die anyway, it might as well do some good. But I didn’t die. In fact, although there was a cloud hanging over my future, I found, to my surprise, that I was enjoying life in the present more than before. I began to make progress with my research, and I got engaged to a girl called Jane Wilde,whom had met just about the time my condition was diagnosed. That engagement changed my life. It gave me something to live for. But it also meant that I had to get a job if we were to get married. I therefore applied for a research fellowship at Gonville and Caius (pronounced Keys) college, Cambridge. To my great surprise, I got a fellowship, and we got married a few months later.  The fellowship at Caius took care of my immediate employment problem. I was lucky to have chosen to work in theoretical physics, because that was one of the few areas in which my condition would not be a serious handicap. And I was fortunate that my scientific reputation increased, at the same time that my disability got worse. This meant that people were prepared to offer me a sequence of positions in which I only had to do research, without having to lecture.

We were also fortunate in housing. When we were married, Jane was still an undergraduate at Westfield College in London, so she had to go up to London during the week. This meant that we had to find somewhere I could manage on my own, and which was central, because I could not walk far. I asked the College if they could help, but was told by the then Bursar: it is College policy not to help Fellows with housing. We therefore put our name down to rent one of a group of new flats that were being built in the market place. (Years later, I discovered that those flats were actually owned by the College, but they didn’t tell me that.) However, when we returned to Cambridge from a visit to America after the marriage, we found that the flats were not ready. As a great concession, the Bursar said we could have a room in a hostel for graduate students. He said, “We normally charge 12 shillings and 6 pence a night for this room. However, as there will be two of you in the room, we will charge 25 shillings.” We stayed there only three nights. Then we found a small house about 100 yards from my university department. It belonged to another College, who had let it to one of its fellows. However he had moved out to a house he had bought in the suburbs. He sub-let the house to us for the remaining three months of his lease. During those three months, we found that another house in the same road was standing empty. A neighbour summoned the owner from Dorset, and told her that it was a scandal that her house should be empty, when young people were looking for accommodation. So she let the house to us. After we had lived there for a few years, we wanted to buy the house, and do it up. So we asked my College for a mortgage. However, the College did a survey, and decided it was not a good risk. In the end we got a mortgage from a building society, and my parents gave us the money to do it up. We lived there for another four years, but it became too difficult for me to manage the stairs. By this time, the College appreciated me rather more, and there was a different Bursar. They therefore offered us a ground floor flat in a house that they owned. This suited me very well, because it had large rooms and wide doors. It was sufficiently central that I could get to my University department, or the College, in my electric wheelchair. It was also nice for our three children, because it was surrounded by garden, which was looked after by the College gardeners.

Up to 1974, I was able to feed myself, and get in and out of bed. Jane managed to help me, and bring up the children, without outside help. However, things were getting more difficult, so we took to having one of my research students living with us. In return for free accommodation, and a lot of my attention, they helped me get up and go to bed. In 1980, we changed to a system of community and private nurses, who came in for an hour or two in the morning and evening. This lasted until I caught pneumonia in 1985. I had to have a tracheotomy operation. After this, I had to have 24 hour nursing care. This was made possible by grants from several foundations.

Before the operation, my speech had been getting more slurred, so that only a few people who knew me well, could understand me. But at least I could communicate. I wrote scientific papers by dictating to a secretary, and I gave seminars through an interpreter, who repeated my words more clearly. However, the tracheotomy operation removed my ability to speak altogether. For a time, the only way I could communicate was to spell out words letter by letter, by raising my eyebrows when someone pointed to the right letter on a spelling card. It is pretty difficult to carry on a conversation like that, let alone write a scientific paper. However, a computer expert in California, called Walt Woltosz, heard of my plight. He sent me a computer program he had written, called Equalizer. This allowed me to select words from a series of menus on the screen, by pressing a switch in my hand. The program could also be controlled by a switch, operated by head or eye movement. When I have built up what I want to say, I can send it to a speech synthesizer. At first, I just ran the Equalizer program on a desktop computer.

However David Mason, of Cambridge Adaptive Communication, fitted a small portable computer and a speech synthesizer to my wheelchair. This system allowed me to communicate much better than I could before. I can manage up to 15 words a minute. I can either speak what I have written, or save it to disk. I can then print it out, or call it back and speak it sentence by sentence. Using this system, I have written a book, and dozens of scientific papers. I have also given many scientific and popular talks. They have all been well received. I think that is in a large part due to the quality of the speech synthesiser, which is made by Speech Plus. One’s voice is very important. If you have a slurred voice, people are likely to treat you as mentally deficient: Does he take sugar? This synthesiser is by far the best I have heard, because it varies the intonation, and doesn’t speak like a Dalek. The only trouble is that it gives me an American accent.

I have had motor neurone disease for practically all my adult life. Yet it has not prevented me from having a very attractive family, and being successful in my work. This is thanks to the help I have received from Jane, my children, and a large number of other people and organisations. I have been lucky, that my condition has progressed more slowly than is often the case. But it shows that one need not lose hope.