The Trump administration claimed Iranian general Qasem Soleimani was planning “imminent attacks” on US interests when it assassinated him. That lie was just destroyed, but not before countless corporate media outlets transmitted it to the public.

Desperate to justify the US drone assassination of Iranian Major General Qasem Soleimani, Secretary of State Mike Pompeo insisted that Washington had made an “intelligence-based assessment” that Soleimani was “actively planning in the region” to attack American interests before he was killed.

President Donald Trump justified his fateful decision to kill the Iranian general in even more explicit language, declaring that Soleimani was planning “imminent attacks” on US diplomatic facilities and personnel across the Middle East.

“We took action last night to stop a war,” Trump claimed. “We did not take action to start a war.”

Trump’s dubious rationale for an indisputably criminal assassination has been repeated widely across corporate media networks, and often without any skepticism or debate.

At a January 3 State Department briefing, where reporters finally got the chance to demand evidence for the claim of an “imminent” threat, one US official erupted in anger.

“Jesus, do we have to explain why we do these things?” he barked at the press.

According to Abdul-Mahdi, he had planned to meet Soleimani on the morning the general was killed to discuss a diplomatic rapproachment that Iraq was brokering between Iran and Saudi Arabia.

Abdul-Mahdi said that Trump personally thanked him for the efforts, even as he was planning the hit on Soleimani – thus creating the impression that the Iranian general was safe to travel to Baghdad.

“But at the same time American helicopters and drones were flying without the approval of Iraq, and we refused the request of bringing more soldiers to US embassy and bases” iraqi PM said.

“I was supposed to meet Soleimani at the morning the day he was killed, he came to deliver me a message from Iran       responding to the message we delivered from Saudi to Iran” Iraqi PM said.

1,782 people are talking about this

Soleimani had arrived in Baghdad not to plan attacks on American targets, but to coordinate de-escalation with Saudi Arabia. Indeed, he was killed while on an actual peace mission that could have created political distance between the Gulf monarchy and members of the US-led anti-Iran axis like Israel.

The catastrophic results of Soleimani’s killing recall the Obama administration’s 2016 assassination of Mullah Akhtar Muhammad Mansur, a Taliban leader who was eager to negotiate a peaceful end to the US occupation of Afghanistan. Mansur’s death wound up empowering hardline figures in the Taliban who favored a total military victory over the US and triggered an uptick in violence across the country, dooming hopes for a negotiated exit.

Since Soleimani’s assassination, Iraq’s parliament has voted to expel all US troops from the country and Iran’s Grand Ayatollah Ali Khamenei has sworn to exact a “severe revenge” on the “the criminals who have stained their hands with [Soleimani’s] and the other martyrs’ blood…”

Trump, for his part, tweeted a litany of gangster-like threats, promising to destroy Iranian cultural sites if it retaliated and pledging to sanction Iraq “like they’ve never been before” if it ousted US troops.

….hundreds of Iranian protesters. He was already attacking our Embassy, and preparing for additional hits in other locations. Iran has been nothing but problems for many years. Let this serve as a WARNING that if Iran strikes any Americans, or American assets, we have…..

….targeted 52 Iranian sites (representing the 52 American hostages taken by Iran many years ago), some at a very high level & important to Iran & the Iranian culture, and those targets, and Iran itself, WILL BE HIT VERY FAST AND VERY HARD. The USA wants no more threats!

128K people are talking about this

Trump’s treacherous assassination has brought the US closer to war than ever before against a country more militarily potent than any adversary it has faced since the Korean War. And as with the failed US invasion of Iraq, Washington’s casus belli for triggering this conflict was based on falsified intelligence sold to Americans by administration officials, and on a pliant Beltway media acting as their megaphone.

With its claim of “imminent attacks,” the Trump administration has essentially re-mixed Condoleeza Rice’s 2003 warning that “we don’t want the smoking gun to be a mushroom cloud.” Back then, the US attacked a sovereign state to rid it of WMD that did not exist. This time, it killed the second-most important Iranian official to prevent a killing spree that was not on the way. And Trump administration officials knew they were lying.

In fact, Pompeo pitched assassinating Soleimani to Trump several months ago, well before any attacks were “imminent.” And in the wake of the general’s killing, a US official revealed to the New York Times that the NSA had intercepted “communications the United States had between Iran’s supreme leader, Ayatollah Ali Khamenei, and General Suleimani showing that the ayatollah had not yet approved any plans by the general for an attack.”

But the preponderance of evidence exposing Trump’s basis for killing Soleimani as a titanic lie has not generated the same level of media interest as the lie itself.

On January 3, CNN assigned three reporters to disseminate the Trump administration’s disinformation about Soleimani, claiming without a hint of critical detachment that he was “planning specific attacks on US interests, including US personnel.”

After the story went live, CNN’s lead reporter, Jim Sciutto, reached out to another official US source to “confirm” his now-discredited piece of war propaganda. In Sciutto’s mind, if more than one US official says a thing, it must be true.

NatSec Adviser O’Brien confirms our earlier reporting on a briefing call, saying Soleimani was planning attacks on American troops and diplomats in the region. https://twitter.com/jimsciutto/status/1213131621882314753 …

New reporting: US acted on intel that Soleimani was planning attacks on US interests in multiple countries in the region, including on US personnel. Source told me this was “beyond the normal chatter.” With @DanaBashCNN & @PamelaBrownCNN 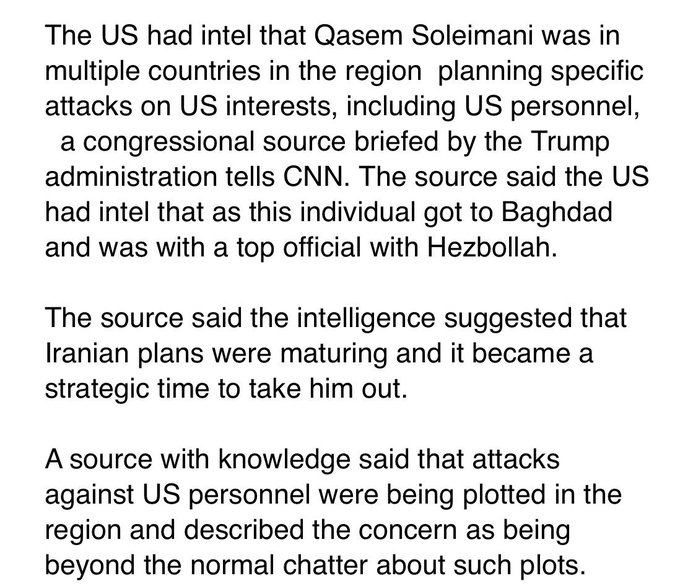 332 people are talking about this
Sciutto is not just any run-of-the-mill national security reporter. During the Obama era, he accepted a job as chief of staff at the US Embassy in Beijing, placing himself at the center of Washington’s gathering Cold War with China. Now back behind CNN’s anchor desk, Sciutto poses as a ferocious critic of Trump while providing the Pentagon and State Department with reliable stenographic services.

No president in recent history has been despised more viscerally by the Beltway press corps than Trump. Nearly everything he says is met with disdain and suspicion, even when he is telling the truth.

But when Trump and his administration attempt to lie the public into war against a designated evildoer, a swath of the corporate media responds with reflexive trust, then shrugs when the lie is exposed in broad daylight.

*Max Blumenthal is an award-winning journalist and the author of several books, including best-selling Republican Gomorrah, Goliath, The Fifty One Day War, and The Management of Savagery. He has produced print articles for an array of publications, many video reports, and several documentaries, including Killing Gaza. Blumenthal founded The Grayzone in 2015 to shine a journalistic light on America’s state of perpetual war and its dangerous domestic repercussions.
Source: THE GRAYZONE